I was fortunate enough to grow up in St. Vincent and the Grenadines, where no judgement was passed based on race. You were judged solely on how hard you worked and how you treated others.

I am very grateful to have two parents that spoke to me about my race and the challenges I would face once we moved to a different part of the world.

When I came to England at 6 years old, in year 2 it became very clear that I was different, but it was my strong Caribbean accent that made me stand out, not my race.

Growing up in East London, I was surrounded by people from all walks of life, people who looked like me, sounded like me and others who didn’t. My school was multicultural, ensuring they celebrated traditions across the board. Black history month wasn’t just a one-hour tick box exercise. It was months of planning, hiring drummers, dance teachers and motivational speakers. Even bringing in parents to cook cuisines from their homelands. I felt celebrated, important and valued. The teachers represented all races and were very open minded. My school experience was the one place I could truly be myself.

Havering Sixth Form College was where I started to see a shift. The sly comments started, “I expected you to sound more ghetto”, one of the white students in my English Literature class said to me with a smile. “You’re not as aggressive as the other black girls I’ve met”, another said to me in my Anthropology class, as a way of complimenting me. Bus drivers would only let a certain number of my friends on a bus at a time because we looked problematic. A simple shopping trip in Romford was met with security following me around like my shadow in the sun. I was constantly catching a Sales Assistant behind me; it became a game of just standing in one place to watch them awkwardly pretend they weren’t following me.

I knew studying Politics at The University of Kent would be out of my comfort zone, but I wanted to experience somewhere other than London. Ignorance is bliss, but ignorance is also insulting and hurtful. “I bet you hear guns in your area on a regular basis”, one of the white students shouted across the classroom as I was introducing myself in my seminar. Watching the white old lady clutch her bag and cross the road when me and my friends were in town. Walking into a nail shop, which clearly had no customers, but somehow, they were too busy to provide a service to me and my friends. Going into a restaurant and being asked to pay before we ordered when everyone else paid at the ending of their meal. The most aggravating moment for me was when I was approached by a white student and asked, “why is it that white people can’t say the N word?”. She said the word! In that moment I had to walk away because I didn’t want to become the stereotypical ‘angry black woman’, even though I would have been right if I had voiced my concerns. One thing you are forced to learn growing up black is you cannot act on emotion. One wrong move and you are the villain. You must tactically choose what level of blackness you want to show to not be viewed as aggressive, or if you are a Black woman – having a bad attitude.

Getting into the working world was another eye-opening experience. Leaving University, I didn’t want a corporate job, so I worked in a pub on Marylebone high street, right after the EU referendum results. I was the only black person, but also one of the only British people. I could see the internal struggle in some people’s faces, they didn’t want to be served by the black girl, but they wanted to talk to the British person. I remember being told that I was born in Africa and my parents were lying to me about where I was born. I remember I mentally calculated someone’s large order and they said “oh, you are smart, I didn’t know someone that looked like you could be smart”. When it came to closing time, I was the person that was always allocated to get people to leave the pub because I was more intimidating, and I had a louder voice.

I wanted to have a career in the corporate world, but I was afraid of losing myself. When I had phone interviews, I remember practising the pronunciation of my words to make sure I didn’t sound ‘too black’. When I had face-to-face interviews, I would ensure my hair was straightened and didn’t look ‘too black’ to ensure the way I looked didn’t ruin my chances. Before all of that, I had to get a chance in the first place. My name was the first identifying factor, Kenneila Quashie, you already know what I look like from reading that. As much as people think there isn’t a bias, there definitely is. I am judged before I am even met. That is why groups like ELBA (East London Business Alliance) exists, because they acknowledge that there is a bias and BAME (Black, Asian and minority ethnic) people are disproportionately represented in the corporate world. I am very grateful to have been connected to ELBA, because they got my foot in the door.

I opened the door, and no one looked like me, so I became a shadow, keeping myself to myself and trying as hard as I could to not be noticed. I remember going to a meeting, and someone turned around and asked me, “are you mute?”. My mental health suffered deeply, I was constantly reminded by friends and my boyfriend at the time how huge this opportunity was, so I would just suck it up and be grateful. In comparison to my friends my life was great. It didn’t feel great. To look at an organisation and see that there is no one at the top that looks like me, made me feel that my growth was stunted, and I already knew I was limited before I even started my journey.

Even though I am viewed as one of the privileged ones because I have a decent job and I am doing alright for my age, there is a different level of pain and suffering from just being black.

No, I have not experienced police brutality and I probably will not in this lifetime.

Yes, I get ‘randomly’ searched at every airport, if a swab is around, I will get swabbed too because of how I look.
Yes, I have been racially profiled and stopped and searched in my car, all because I drive a nice car.

No, I do not fear for my life when I see a police officer or a police car behind me, but I would if I lived in America.
Yes, I have travelled around the world and received the death stare when I am the only black person in the area, making sure that I know that I am not wanted here.

Yes, I have been treated like an attraction in a zoo, my hair being touched without consent and people being fascinated by the colour of my skin.

I have constantly had to conform and change myself to make others happy and more comfortable.

I have spent years perfecting my British accent, to ensure that the way I speak is not a factor for me to be judged and sometimes hoping people wouldn’t be able to tell that I am black from hearing my voice.

I constantly have to hear my name mispronounced and misspelt, all because people don’t want to spend the time to pronounce my simple name Ken-Neil-A.

I constantly have to think about whether the way my hair is, or the choice of my clothes will affect the way someone thinks of me.

I constantly must choose my tone, so people don’t think I am arguing when I am just stating my opinion.

Black people in the UK do not experience the level of brutality that Black Americans do, but the UK is not innocent. The use of micro-aggressions, systemic racism, blatant ignorance, unconscious bias and turning a blind eye all play a part in brutality against black people.

In 2020, we should be so much further ahead. One race should not still be fighting for their right to live.

We are tired! I am tired! Enough is enough!

We're not around right now. But you can send us an email and we'll get back to you, asap.

Soar to new heights with the ELBA Eagles CSR ProgrammeEmployment 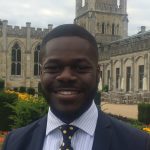 How Eagles helped me on my CSR journeyEmployment